Kids jokes make nearly any situation just a little bit better. Are you waiting out a layover with a grumpy toddler? Little kid jokes get kids laughing using simple language and concepts. Distracting elementary-aged kids from boredom during a long family road trip or some downtime in the RV? Riddles will keep brains whirring and tempers even. Even the punniest of knock knock jokes are good for the brain and the spirit.

And whether you’re telling them (or hearing them) on the road or at home, funny kids jokes make the time pass with a little more levity.

Kids Jokes: Why We Love Them

Jokes require a relatively complex set of skills that’s great to encourage in kids. In order to be a successful teller of jokes, you first hear or read a joke and decide whether it’s funny or not. Then you have to remember it for long enough to tell someone else, and understand the structure of humor enough to be able to nail the delivery.

You then tell the joke (sometimes again and again), which is great short storytelling practice and helps kids make interpersonal connections.

Where to Find Great Kids Jokes

The three great resources for finding funny jokes for kids are the internet, joke books, and talking to other kids. Some schools and after school care programs even have what’s called Joke Fridays, a time for kids to tell and trade jokes; these can be a treasure trove of jokes for children.

TRAVEL WITH TODDLERS: 10 Best Vacations for Toddlers (That Parents Will Enjoy Too)

Little kid jokes need to be a little simpler and rely less on big words or the ability to spell. But, ideally, they should still be, you know, funny. Here’s a selection of little kid jokes sure to tickle your family’s funny bone.

ONCE-IN-A-LIFETIME: 7 Iconic U.S. Attractions Kids Should See Before They Grow Up

Sometimes the best jokes are silly jokes; other times, they’re jokes that delight kids just a bit with an alternate meaning or a surprise ending. Here are some funny jokes for kids to add to your family repertoire so you’ll always have a laugh at the ready.

ROAD-TRIP READS: 33 Books Like Harry Potter to Binge on Your Next Vacation

Riddles offer a slightly sophisticated twist on the classic kid joke, often relying on double meaning of words and lateral thinking. They’re great for elementary-aged kids as well as tweens and teens, and punchlines often deliver that “oooooh!” moment rather than a classic belly laugh.

Knock knock jokes offer kids the rare chance to have the upper hand in a conversational exchange with grown-ups. They may not be the ultimate in funny, but these lesser-known knock knock jokes will at least save you from that twentieth round of “knock knock, who’s there, banana …”

Knock knock
Who’s there?
Europe?
Europe who?
No, you’re a poo!

LIFE LESSONS: How Travel Can Help You Teach Your Kids about Money

Silly joke books for kids are a good source of new material. Here are several tried-and-true kids jokes books that always get a good giggle.

1. Laugh Out Loud Jokes for Kids

3. The Big Book of Silly Jokes for Kids 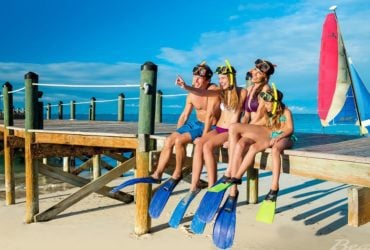