The newest ship from Disney Cruise Line, Disney Wish, will set sail in 2022, and Disney Cruise Line has already revealed a boat load of details about the new on-board experiences you can expect. Some are just for grown ups (Star Wars: Hyperspace Lounge date night anyone?) and some are only for kids, but several are designed to encourage family togetherness. One of those new experiences is Disney Uncharted Adventure, an all-new interactive game that will take families on a heroic quest throughout the Disney universe.

What Is Disney Uncharted Adventure?

“With the Disney Wish, we have an incredible opportunity to immerse our guests in the worlds of their favorite stories in surprising, interactive, and completely unique new ways,” says Davey Feder, software product manager, Walt Disney Imagineering. “With Disney Uncharted Adventure, we’re literally putting the power in our guests’ hands to become the heroes of a grand adventure that can only be done on a Disney cruise.”

How Do You Play Disney Uncharted Adventure?

The Disney Uncharted Adventure game will actually begin before you even leave for your cruise. To help build excitement for your journey, you’ll receive a message in the app from Captain Minnie and Captain Mickey explaining the magical stars and constellations that are only visible from the ship, including a very special wishing star.

Once on board, you’ll use your spyglass to look into the night sky and view these constellations, but when the wishing star shatters and gets scattered across the sky, Captain Minnie will need your help repairing the wishing star. You’ll do this by completing missions, collecting the pieces of the wishing star, and returning it to its spot in the sky. To encourage teamwork and a little friendly competition, your family can team up on one or two devices or everyone can use their own (up to six devices total).

FIRST LOOK: Everything You Need to Know about Disney’s Newest Cruise Ship

On each mission, you’ll use your magical spyglass to transform seemingly common items on board the ship into enchanted locales from your favorite Disney stories. For example, a digital sign outside a restaurant may transform into a mini-game where you use your spyglass to complete a mission and collect a piece of the wishing star.

And because the Disney Uncharted Adventure game utilizes augmented reality and other innovative technology, your face won’t be stuck in your phone while you play. “While guests will need a mobile device to play, this isn’t a traditional mobile gaming experience,” Feder says. “This is a heads-up, active experience that can be played with family and friends. The magic will happen all around the ship. The spyglass is not where the adventure takes place—it’s just the tool that brings the ship to life, opening portals into new worlds and allowing guests to interact with them.”

Which Characters Can You Interact with While Playing Disney Uncharted Adventure?

Disney Cruise Line hasn’t shared details on all of the characters you’ll meet and lands you’ll visit during your quest, but we do already know a few. You may find yourself visiting with characters from Princess and the Frog, Finding Nemo, and Moana to retrieve pieces of the wishing star.

FAMILY CRUISES: 7 Best Cruise Lines for Families (and Their Most Kid-Friendly Ships)

“Guests might admire a beautiful painting today without realizing that, hiding right beneath the surface, there’s a hoard of mischievous Kakamora from the world of Moana just waiting to escape and wreak havoc on the ship,” Feder says. “A digital menu board might showcase what’s for lunch in the afternoon, but later it will host a cooking lesson in Tiana’s own kitchen.”

How Long Does it Take To Complete the Missions in Disney Uncharted Adventure?

Disney knows the importance of versatility and customization when dealing with families who want to do and see it all during their vacation. Because of this, they’ve built Disney Uncharted Adventure with the functionality for you to go at your own pace. You can complete the missions at any time during your cruise and stop and start at your leisure.

CRUISE VACATIONS: How to Plan and Book Your First Cruise Vacation

In fact, you don’t even have to complete every Disney Uncharted Adventure mission (or any mission, for that matter) in order to attend the live grand finale event onboard the cruise ship. All Disney Wish passengers are invited to this live interactive event where everyone in attendance will face off against the Disney villain who wants the wishing star for themselves. Passengers will work together to restore the wishing star and the Disney universe.

More details about Disney Uncharted Adventure will be announced as the ship’s inaugural season approaches. Bookings are already open for Disney Wish‘s inaugural season in 2022. All cruises will sail from Port Canaveral, Florida, to Nassau, Bahamas, with a stop at Disney’s private island, Castaway Cay. Check back with us for more details on Disney Uncharted Adventure and the other family-friendly offerings on board the Disney Wish in the months to come.

Hogwarts Castle towers over the Hogsmeade area of 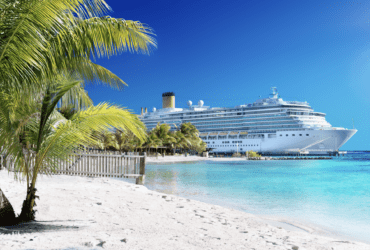 From once-in-a-lifetime trips to no-passport-needed family resorts, these are the best family vacation ideas for 2021 and 2022. 7 Best Cruise Lines for Couples (and Their Most Romantic Voyages)

These couples cruises are tailored for romance and relaxation.